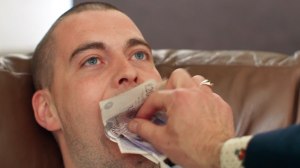 The Financial Conduct Authority (FCA) is to take significant steps to regulate the legal loan sharks of the payday lending industry.

Through the autumn, Church Action on Poverty supporters mounted a major campaign to persuade MPs and the FCA to adopt our Charter to Stop the Payday Loan Rip-off.

On 8 January, we received a letter in response from Martin Wheatley, Chief Executive of the FCA. He outlines what actions they propose to take, responding specifically to each point our supporters have raised.

Mr Wheatley asked us to share his response with our supporters. You can click here to download his letter in full, but here are the key points:

As you are aware, responsibility for regulating consumer credit will transfer from the Office of Fair Trading (OFT) to us in April. Ahead of the transfer we have consulted on our new rules for all consumer credit firms. The consultation closed on 3 December and we are now considering all the responses we have received.

We are proposing specific new rules for payday lending and other forms of high-cost short-term credit. These proposals have two main aims: ensuring that firms only lend to borrowers who can afford it; and increasing borrowers’ awareness of the costs and risks of unaffordable borrowing. I set out our thinking below:

In addition, the Government has given us a duty to cap the cost of credit. The duty was formally established through the Financial Services (Banking Reform) Act 2013. As we said in October, when we published our proposed regime for all consumer credit activities, we need to gather more information before we can cap the cost of credit. This is a complex issue and there are many different aspects to consider to set a cap that works well for the UK market. That means researching it, economic analysis and then publicly consulting on its use. We will also consider the lessons of other countries that have adopted this power, to ensure that any cap is right for UK consumers.

We would like to thank everyone who supported this campaign action. You have helped to make a real difference for the thousands of people on low incomes who are currently being exploited by rip-off lenders.