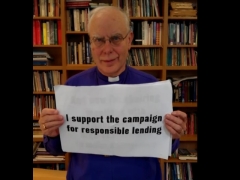 Amongst the unexpected privileges of the last couple of years was the chance to chair a series of meetings at Church House, Westminster between Thrive, high-cost lenders and Church Action on Poverty.

Revd John Packer, Bishop of Ripon and Leeds, writes about his experiences supporting our work for Fair Prices:

We were a disparate group – lenders, those whom they serve, and campaigners.

The cutting edge was provided by those who used high-cost lenders because they needed to do so, yet found themselves often regarded with suspicion and made to feel as though they were somehow blameworthy.

The lenders were pragmatic, indeed anxious to be as helpful as possible. Lenders and users alike were critical both of ‘loan sharks’ and of those they regarded as feckless, which provided a common cause – sometimes to the discomfort of the campaigners, who were challenged by the agreement of lenders and users that there needed to be a defence against those who tried to abuse the system. 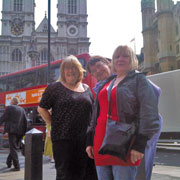 Nevertheless, the Thrive group, from Stockton-on-Tees, challenged effectively the assumptions of the lenders that they combined business acumen with philanthropy.  While the lenders tended to concentrate on principle and systems, the Thrive members pointed to countless illustrations of oppressive practice: the building up of extortionate interest rates;  second-class goods which broke down; customers persuaded to buy unaffordable goods.

The theme of the debates was the need for a code of practice among lenders. I believe there was real dialogue between those in the room. There was a determination on the part of those who had taken out loans for essential goods to make themselves heard. They needed washing machines, sofas, televisions, and their circumstances meant that they had to pay unreasonable rates of interest to acquire essential items.

The sense of grievance would not be quietened by the sweet reasonableness of those in suits, and gradually the representatives of the lenders were persuaded to listen.

So what was the result?  In some ways, disappointing. No code of practice emerged despite promises to try to produce one. The lenders became quite suspicious of one another as commercial interests became dominant, and rivalry built up. The customers had to bring us back to the point – their needs and the right to be treated fairly. Nonetheless, I believe progress was made. More recently, government has become interested in the activity of payday lenders. There has been further interest in the work of credit unions – barely mentioned in our discussions. Indeed, one of the issues left for me was the comparative weakness of credit unions in this country. Should government be doing more to make it easier for such unions to thrive? If so, how?

We were left with powerful pressure but no clear way forward. I hope Thrive felt listened to, though I share some frustration. Those in the industry did feel some of the anger legitimately expressed. I hope Church Action on Poverty and campaigners felt it was a worthwhile bringing together of people who rarely meet one another.  It is for Church Action on Poverty now to develop the theme to pressurise government into action – the evidence should be of real value.

So what has it got to do with Christianity? Relationships made like this, in the heat of the furnace, should lead to deeper understanding and justice. They should also be a source for prayer.

God is a God of generosity and justice. God would have been there in that room.

Church Action on Poverty will be continuing the work for Fair Prices in the coming months, as part of our ‘Food, Fuel, Finance’ project.