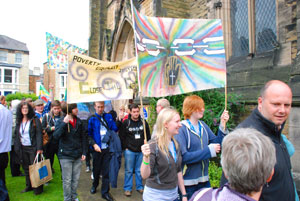 In an encouraging sign of a growing willingness to speak out, several Christian denominations have come out strongly against the impact of spending cuts and welfare reforms on the most vulnerable in the past couple of weeks.

Hundreds of members of the United Reformed Church General Assembly took part in a Walk of Witness through Scarborough last week to express concerns about the disproportionate impact of spending cuts and welfare reforms on the most vulnerable in our society.

The walkers, led by the moderators of the General Assembly, The Revd Dr Michael Jagessar and Mrs Val Morrison, presented local MP, Robert Goodwill, with a copy of the Scarborough Statement and the URC’s Report on Poverty and Inequality, which was debated by the General Assembly.

Dr Jagessar, moderator of the URC General Assembly said: “We are here to express our solidarity with all those living in poverty – who are feeling the impact of the economic stagnation and public spending cuts in the UK particularly severely.  Poorer people rely most on public services, and spending cuts are estimated to hit the poorest tenth of the UK population 13 times harder than the richest tenth – especially women.  We wish to advocate and affirm political choices that build community and the common good of all.”

Mr Goodwill, a government whip, promised he would get the Scarborough Statement into the prime minister’s red box and make sure that the government was aware of the Church’s concerns.

Meanwhile, the Presbyterian Church of Wales has called on the Westminster Government to ensure that payday lenders are strictly regulated.

The Church’s General Assembly this week criticised the business practices of companies which lend for days or weeks to people who need cash to tide them over at the end of the month.  Such companies are regularly criticised by anti-poverty charities, as their interest rates can be exceptionally high.

“Wonga.com is the best-known name in this sector, but there are dozens of other companies offering terrifically expensive short-term loans,” said Reverned Bryn Williams, General Secretary.  “In some cases, the interest rate on a loan can be as high as 4,000 or 5,000%.  Even though the companies argue that they only provide short-term loans, some people have to approach another company for a loan to pay off the first, and this results in even more debt.  It’s a vicious circle. We will be writing to the Office of Fair Trading requesting that it reconsider its decision not to cap the interest rate.”

Meanwhile, the Church of England General Synod debated Testing the Bridges a report on the impact of last summer’s riots.

The Bishop of Bath & Wells, Rt Revd Peter Price, warned that the country faces more episodes of violent disorder similar to that which hit the nation in August last year. In an address to General Synod, Bishop Price warned that the Government’s austerity measures had social consequences, which were having a disproportionate impact on the poor.

“The tragedy of our times is that we have a large population of young people who are desperate to escape from the constrained lives to which they seem to be condemned. Where hope has been killed off, and with no prospect of escape, is it surprising that their energies erupt in antisocial and violent actions?”

Scots: The purposes of economic activity

All this follows on from the Church of Scotland’s General Assembly in May, which turned its fire on pay day loans, austerity measures and tax dodgers. The Commission on the Purposes of Economic Activity highlighted that for too long the economy has been promoted as existing for the markets. The report warned of the danger of following the markets and argues that unless the “invisible hand” of the markets is controlled in some way the vulnerable and poor will always be at the end of the line. The report outlines four priorities for government, society and the church that should be at the heart of economic considerations: Reducing inequality; ensuring sustainability; promoting mutuality and ending global poverty.

So, all in all, a good few weeks for the Churches in terms of nailing their colours to the mast of tackling inequality, challenging austerity and tax dodgers… The hard part starts now: Turning fine words into real political pressure on politicians to act.

That’s where you come in…